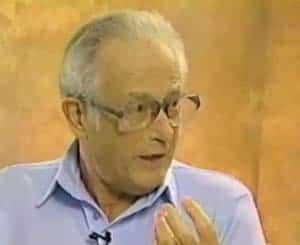 a paper by Sid Parnes, submitted by Anthony Hyatt

The following is a piece about the creative ways in which a person might positively approach the problem of losing someone they love – by looking upon the death of a loved one as an opportunity in his or her life. Sid prepared the paper for a pioneering Symposium of the Foundation of Thanatology in 1973.

An industrial firm used the slogan, “All our problems are opportunities.” However, one of its executives confided to me that they were working on some very “insurmountable opportunities”! Perhaps this is the immediate reaction one might have, were I to suggest that the death of a loved one might be an opportunity. At the risk of seeming to be inhuman, I will discuss a point of view about death that I have arrived at as a result of my work with programs in creative problem-solving and human development. I suggest that a person might take a unique thanatological stance – by looking upon the death of a loved one as an opportunity in his or her life.

We learn and practice various rites associated with passage into each succeeding stage of life: the ceremonies of baptism, bar mitzvah, marriage, etc. Each stage is customarily accompanied by a positive, happy state of mind of those concerned. But we often do not know how to accept death, the ultimate stage, as a positive thrust in our lives. We rely on the learned rituals and traditions surrounding death but fail to create new ways of dealing with our bereavement. Just as there are many new ways being conceived by today’s youth for handling the “marriage ceremony,” there might likewise be many fresh, constructive approaches to coping with the death stage. If a person were able to maintain a “future orientation,” he might view the person he lost as the source of a storehouse of memories that could help provide a springboard for an introduction to an unknown but challenging future.

The objective of creative problem-solving programs is to help students develop attitudes and abilities that will help them meet positively and creatively any future challenge in our rapidly-changing world. The death of a loved one can be one of these challenges. If a person is taught throughout his life, or at least somewhere in his life, to look for ways to turn every set-back into an advantage, he might much better be able to “cope.”

Psychologists are learning that the ability to cope effectively is related very closely to sound mental health. Psychologists Marvin Goldfried and Thomas D’Zurilla conceive of training in creative problem-solving (emphasizing ability to cope in all types of situations) as “. . . a form of self-control training, in that an individual learns to become more effective on his own . . .” (1969). In an earlier unpublished paper, these researchers went so far as to suggest that problem-solving principles are potentially useful for training a client to serve as “his own therapist.”

A striking illustration of the effects of creative problem-solving programs on coping behavior is the following excerpt from a letter from a man who was involved for several years in such courses.

Over the years I have made a connection for myself between the conscious awareness of one’s creative potential and mental health. You are probably aware that I have made many other connections to CPS as well, but this particular one I have never discussed. It is really simple: by being able to solve many of the minor problems with which I am confronted through conscious effort on my part, I continually strengthen my own belief that I am able to exercise control over my immediate environment. It helps keep me aware that I do in fact have control over a large portion of my future and in times when cause and effect are often so many steps removed from one another, it helps me reduce differences to a lower common denominator enabling me to better cope..

Developing new coping strategies is increasingly important as change becomes, paradoxically, the constant feature of what Warren Bennis calls our “Temporary Society” (1969). It seems that we need not leave the development of the highly conscious, self-actualizing person to chance; the evidence suggests that education can help to produce more such people – people who are able to cope with the rapidly-changing dimensions of our life (Parnes, 1967, Parnes & Noller, 1972).

An individual might take a positive, optimistic stance when facing bereavement. He might draw on all of his resources to develop a multitude of ideas regarding questions such as the following:

Countless other related questions could be derived to spur the person into “future thinking” instead of “past-oriented thinking”. In looking toward these new directions to explore in his life, a bereaved person might think up a variety of answers to questions like the following:

Each of those questions suggest possibilities for many challenges that could be undertaken to awaken new interest in the person’s life.

Highlighting the relationship of problem-solving or coping behavior to the matter of thanatology, I might cite Hamburg and Adams (1967) who stress:

But distress of high intensity or long duration is a powerful impetus to the formation of new strategies, integrating internalized orientations and current opportunities. Such new strategies, if effective, are likely to become available for use in future crises, and indeed may broaden the individual’s problem-solving capability.

Thus the individual’s meeting of the bereavement crisis in constructive ways may well strengthen his ability to cope in general, in an increasingly uncertain world. Programs in creative problem-solving, designed to nurture personal creativity, provide much opportunity for practice in this type of coping behavior. Thus the “new strategies” to which Hamburg and Adams refer are developed for future crises or challenges of any type, including the loss of loved ones. Creative problem-solving training can help people to develop strategies and even more importantly, can develop the kinds of attitudes necessary to be willing to approach life’s new challenges constructively.

I am reminded of the cartoon series, “In Vietnam.” One cartoon has especially illustrated this kind of attitude. It shows several soldiers in a dugout, with bullets whistling above them in every direction. The first soldier says to the other, “So what if we’re surrounded; now we can shoot at them in any direction.”

The optimist sees a glass of water as half full; the pessimist sees it as half empty. Fran Striker, the originator of the Lone Ranger, commissioned two people to independently appraise a parcel of land he was interested in purchasing. One reported, “There are dead trees all over the place, there’s a stream so narrow that you can almost always step across it, and the weeds are six feet high.” The second person, reporting on the same observation, commented as follows: “There is enough firewood on the land to last a lifetime, there’s a stream wide enough in one spot to dam up into a swimming hole, and it’s the richest most fertile land in the area.”

Returning specifically to thanatology, can a person learn to derive this kind of positive viewpoint? Can he learn to turn a tragedy into some meaningful, constructive, positive influence in his life? I believe he can, if he learns to focus in a positive, coping way. If he learns to study his strengths and capabilities, and to capitalize on these, at whatever levels they exist, he may be able to creatively meet his new challenges in a self-actualizing process. Fortunate is the person who, before bereavement, has internalized processes of creative problem-solving.

I remember vividly my reaction to the assassination of President Kennedy and to the events of the day of his funeral. I believe I was as moved as anyone by this senseless tragedy, but I couldn’t bring myself to participate in the ceremonies transmitted to the entire world over television that day. Instead, I threw myself into an important job I wanted to get done, and while doing it, I kept reflecting on this question: In what ways might all of the grief and energy and time being expended on that historic memorial to John F. Kennedy be diverted to constructive, life-giving, life-producing activities that would continue and grow as living memorials to this man? I kept wondering what kinds of ideas might have been generated and applied if those involved had asked themselves the kinds of questions that I brought out at the beginning of this article. I wonder what would happen if we all reacted to a tragedy with imagination instead of with habit or convention as is so typically the case.

The concept of serendipity is germane to my thesis. Serendipity is a coined word attributed to Horace Walpole, who wrote the story of the three princes of Serendip. The princes had the happy faculty of making unexpected discoveries of things they were not looking for while they were looking for something else. Serendipity relies on an awareness of relevancy in accidental happenings. Instead of the accident being written off as irrelevant and a deterrent to the goal, it suddenly takes on a new meaning that is related to the goal. A good example of serendipity is the behavior of Duke Ellington, who was playing a concert at an outdoor festival when a low-flying plane noisily appeared above the grandstand. Duke changed the tempo to integrate the extraneous sounds of the engine and directed the plane along with the orchestra!

The derivation of the thanatology movement exemplifies this notion of serendipity. Dr. Austin H. Kutscher, founder of the movement, stumbled into his idea when, upon the tragic death of his wife, he began to try to understand the meaning of life and to accept the fact of human mortality. He sought in a positive way to find thoughts and ideas in the writings of others to help him recover from his grief; but he discovered that the whole area of bereavement had been sadly neglected. This discovery led him to his quest to bring together and publish materials for professionals and laymen on this important aspect of everyone’s life.

Transcribed from the mini-book entitled AHA! Insights into Creative Behavior (Parnes, 1975), and intended for free distribution to friends who celebrate the life and work of Sidney J. Parnes. The paper is printed in its entirety below. Click here to download a PDF version for printing. The material is copyright protected by D.O.K. publishers of Buffalo, NY.